Every once in a while I really need to escape to the fun and fluff of what might be called chick lit.. But sadly, a majority of these books leave me less than sated. The plots are wafer thin and characters are one dimensional.

So thank the twinkly stars above for Teri Wilson’s gem of a novel The Accidental Beauty Queen.

Charlotte Gorman is a bookish lass who adores her job as a elementary school librarian. Her identical twin sister, Ginny, is a stunning beauty and Instagram star.

As The Accidental Beauty Queen begins, Ginny is hell bent on winning the Miss American Treasure pageant. However, her hopes are nearly dashed when she has an allergic reaction and her looks are severely compromised. She convinces Charlotte to go as her replacement, which Charlotte begrudgingly agrees to do even though it compromises her sense of right and wrong. In The Accidental Beauty Queen the Gorman sisters travel a twist and turn journey that opens both their minds and their hearts about the very different worlds they live in.

The premise interested me and thank goodness the novel did not  disappoint. Both Charlotte and Ginny, along with the stable of supporting characters, are multi-dimensional and Gorman girls convey the complexities of sisterhood in a way that is very relatable. They are more than they seem.

Speaking of sisterhood, the contestants are not bimbos or bitches, but funny, bright, accomplished and fully supportive of each other.

And then there is a certain mystery gentleman, Gray, who enters Charlotte’s life. Is he a Prince Charming who will sweep Charlotte off her platform stilletoed feet or a callow playboy who will break her heart into a million little shards? Like I mentioned, I really adored The Accidental Beauty Queen. Wilson can actually write and she keeps you guessing as a reader. She doesn’t rely on tired old clichés that lazy writers often do. She has a clever way with dialogue that is contemporary but wouldn’t seem out of place in a 1930s’ screwball motion picture.

The plot is funny and vibrant, but at times heartbreaking and profound. And her sexscenes are actually sexy, not sleazy.

In other words, Wilson writes chick lit for those who aren’t into chick lit. I can’t recommend The Accidental Beauty Queen enough.

The best movie adaptations of famous books according to the Stylist.

Essential reading on the movie industry according to the Hollywood Reporter.

The late Ursula K Le Guin’s list on the books that meant the most to her.

How much do you know about librarians?

Libraries do so much more than we think.

Library code: The language of libraries.

How the wealthy could help our libraries.

Signs that show why libraries rock!

The world’s most stunning libraries.

Mental Floss on why libraries mean so much. 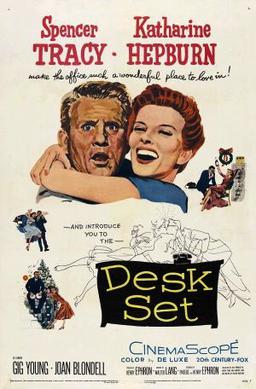 Librarians of all kinds aren’t just found in public libraries; they are also found in schools, universities, corporations and other organizations. This post is in honor of reference librarians-the human versions of Google. Enjoy!

Human beings being replaced by high tech is something many American workers worry about, and it’s not a recent phenomenon as Spencer Tracy and Katharine Hepburn show us in the 1957 comedy Desk Set.

Desk Set takes place at the Federal Broadcasting Company, a fictional television network. Katharine Hepburn plays Bunny Watson, the head of FBC’s huge reference library. Bunny can recite facts faster than you can say, “Google it!” She and her brainy staff, played by Joan Blondell, Dina Merrill and Sue Randall, are kept quite busy with staffers calling up looking for the 411 on a multitude of topics, both the mundane and the serious.

However, there seems to be trouble on the horizon. The network is in talks to merge with another company, but at the moment it seems to be on the down low. FBC brings in an efficiency expert named Richard Sumner played by Spencer Tracy. Richard has also invented a computer system called EMERAC, an “electronic brain” that is supposed to help the workers with the merger. However, many of the workers think these computers will replace them, and they wonder when they’ll get fired.

Richard and Bunny soon meet when he comes into her department taking measurements for the computers. Richard begins to question Bunny, wondering if she can answer as quickly as a computer. One smart cookie, Bunny has no problem answering the questions and proves to quite the foil to Richard’s efficiency expertise.

Instead of being turned off by Bunny’s brains, Richard is actually quite charmed. And despite her hesitation, Bunny can’t help but be drawn towards Richard. She’s been with her boyfriend, Mike (Gig Young), for seven years with no promise of marriage in sight. Hey, Bunny isn’t getting any younger. Bunny and Richard spar and flirt the way only Hepburn and Tracy can.

Towards the end of the film, a giant computer is placed in Bunny’s department to help everyone field questions more efficiently. However, despite the “advanced” technology, the computer is no match for Bunny and her fearless staff. The computer has a near “meltdown” but Bunny and her crew proves to be up to the task. And another computer messes up and mistakenly fires everyone via pink slips placed in their paychecks.

Desk Set is the eighth film Hepburn and Tracy did together (their final film was Who’s Coming to Dinner?), and it’s effortlessly charming. Based on William Marchant’s play with a script by Phoebe and Harry Ephron (yep, the late Nora’s parents), Desk Set is directed with a light touch by Walter Lang. Sure, there are parts that look dated. I had to laugh when I saw the huge computer that took up half of Bunny’s department, and how the answers were spit out on old-school perforated paper.

But despite being made in 1957, Desk Set’s premise looks quite modern.These days, everyone seems to be addicted their tablets, smart phones Googling, Tweeting and updating their Facebook, Pinterest and Instagram pages. But there is truly no replacing our human brains and our need to connect with one another without the use of technology. Desk Set shows this in a fun and entertaining way.