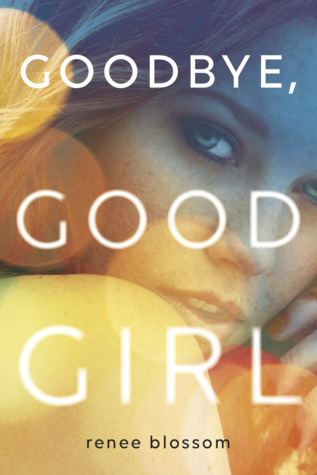 I’m sure many of you are familiar with Jen Locke. She’s written guest reviews for the books The Drowning Guard earlier this year and wrote a review of A Winsome Murder back in 2013. Now she’s back with another review of Renee Blossom’s book Goodbye, Good Girl, which comes out this October.

I really wanted to like this. So many teenagers and children have absent parents. So when a young woman sets off on a quest to rescue her father from perceived life-threatening danger, it’s an incredibly promising story.

Kandace sets off after an event one afternoon when her mother, Ginger, was taken to the ER for an opiate overdose and a strange, well-armed man had entered the family home looking for her father. Kandace thinks her father is a chef who travels the world, cooking for important people. She can’t reach her father – he won’t answer the phone or text her back. After a visit with her mother, who explains there’s an address for him in her bedroom, Kandace decides it’s her responsibility to find him in California and save his life.

When she arrives in St Louis with her boyfriend, he chickens out and goes home because his mom is telling him that’s what he has to do. Kandace isn’t going home. She’s got too much at risk. So she takes off, leaving everything in his car.

She meets April at a bus stop and April recruits her to try exotic dancing – just for one night – to make enough money to get to LA.

As happens too often to young people, Kandace gets addicted to the attention and the highs, even the highs caused by ecstasy. She truly is her mother’s daughter, huh?

Here’s where things get weird. Okay, extra weird. The club in St Louis is like a magical fantasy version of the most dreamy strip club to work at. Maybe clubs like this exist somewhere. Maybe. Probably not. And if they did, they wouldn’t take a new dancer on the same day they met her. But most clubs don’t have magical church women that come with food, gift baskets, and sage advice. They don’t have a beauty, hair, makeup, whatever area. And they definitely don’t have wardrobe. They have a dressing room. With stations that girls stakeout at the beginning of their shifts. They put their belongings, unsecured usually (though there’s usually always someone around to keep everyone honest), by these stations. They bring their own clothes, do their own makeup and hair, and take care of their own personal grooming on their off time. I know, I’ve worked in one such club. And once you’ve seen one, they’re pretty much all the same – give or take a few details here and there.

Blossom takes this opportunity to try her hand at writing light erotica and it sometimes feels forced.

Kandace (aka Autumn) travels from St Louis to Las Vegas to LA, dancing with April the whole way. They became very close friends very quickly and it might be my general outlook on life, but I was waiting for a big betrayal that never happened.

When Kandace and April arrive in LA and locate Kandace’s father, it turns out that he was never in danger. The heavily-armed man who entered her home is someone he knows and is not a threat. Her father is some clandestine operative that cooks sometimes to gain access to events for his work. And by now, this part of the story feels irrelevant.

The entire way, Kandace is incredibly, unbelievably naïve. Even by the end of the book, her actions and assumptions don’t show much evidence of a maturing young woman. She seems to take time to think through her future, but she’s made her decisions long before she admits to them.

I admit it, I was hoping for some awesome story of a young lady saving her father showing ultimate girl power and bringing the family back together again. That was mostly crushed because Kandace was too impulsive. For someone taking on such an important journey, she really didn’t waste time thinking or planning. And to me, that’s a shame. But the other part that drove me insane? Her father’s reaction to the fact that Kandace is now stripping for money. He can’t allow her the space she needs to be herself, to figure herself out, or to make mistakes. He can’t respect her as a human being. He infantilizes her. It’s horrible misogyny and he angered me to no end.

The redeeming thing about the book? So many stories try to tie things up into tidy little bows and make sure that people are happy. That’s not this book. If anything, there’s a much bigger wedge between Kandace and her father. She’s uncomfortable in her hometown. And she’s moving to a city half a continent away, abandoning her mother and sisters who depend on her (truly her father’s daughter, also), to live with a girl she’s known for all of a week. That’s not a happy ending. Not a tragic ending, either. But it’s how things happen in real life. If there’s one thing the author got right, it’s the ending. It’s how things get messy and mistakes get made and sometimes we can’t take them back. And that’s a valuable thing to learn. I admire authors who can take their story to that place without polishing it up all nice and shiny. Thanks for letting us see that our lives aren’t the only crazy lives out there.

I am grateful to NetGalley and Revolve Publishing for the ARC.